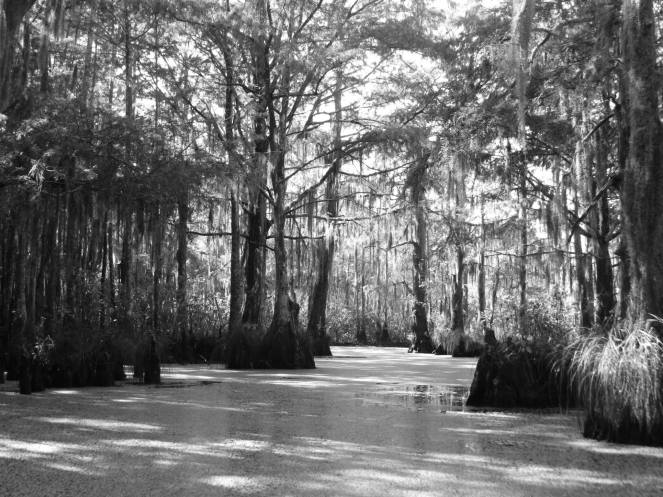 Dusk swept a blanket of stars across the sky, the shadows of the night loomed against draping Spanish moss. The summer air was thick with chirping crickets and synchronized firefly specs reflecting against the bayou water like a mirror.

As peaceful as dusk seemed with an orchestra of insects, nightfall was for the hunt.

Lurking in the swamp among the alligators something else roamed. Something faster than a wild boar can run. Something smarter than a predator can calculate. Something unnatural to the habitat of New Orleans.

Among the stale air, a crackle of thunder pierced through the orchestra, threatening the rhythm. Not far behind, a trickle of rain turned into an assassination of nature’s tears against tin roof tops where dreamers slept. The night was dark, clouded by the brewing storm crippling the crickets to a silence worse than death.

Suddenly, a woman burst out of the comfort of her home into the summer storm without a care in the world. Her feet mushed with the mud, like clay, only it couldn’t hold her back from darting further into the bayou where the storm whipped through.

Thunder crashed from above just as her bare feet collided with the murk of land she found herself in. She ran blindly into the night without as a flashlight to guide her way. Her hair caught the rain, whipping against her skin as she hit into tree after tree.

“Abigail!” she screamed out, her lungs attempting to break the sound of the storm. The woman’s feet stopped abruptly to listen intently. Not for the storm, but for something hidden beneath it. Her palm grasped the bark of a tree as she focused on the sounds of the night. Another clash of thunder erupted when she heard a familiar voice call to her.

Without questioning it, she took off running again, “Abigail, where are you!?” Her voice screamed desperately for a reply, but there was none. The soles of her feet ran over broken sticks and sharp objects piercing them without pain. Her drive was solely on the voice that had captured her in her sleep.

Her lungs heaved to catch air as she paused to place her hands on her knees. That’s when the voice called to her from a few inches away.

She glanced up to the blackness she was met with, “Abby,” she cried out. The woman dropped down to her knees, crawling around the murk in search of what she was desperate to find. “Abby,” she pleaded. “Say something.”

Nothing but slippery dirt caked her hands.

The sound of the sweet southern drawl made the woman cry among the rain as she approached it on her knees. Never had she heard such a beautiful thing. Her hands traced along the slick mud until they ran over coarse fur that reminded her of a wild boar. She flinched backwards, appalled by the texture. When she kicked her heels away from the creature, her eyes naturally tried to catch what was in front of her. She stared at nothing but darkness, “Abby?” she asked cautiously.

There was no response.

Her eyes squinted to catch a pair of golden eyes pierce through the darkness standing six feet tall. They glowed fiercely down at her.

A strike of lightning rippled through the darkness to reveal a monstrous beast with razor sharp claws raised above its head as it was about to strike.

She screamed until it tore out her throat.

One thought on “Welcome to the beginning”